This is the place to look for information on particular animals and selected drawings or other graphical reconstructions done by myself.

Picture of the week: Theropod forelimbs. Besides a few notable exceptions in the technical literature, these are among the more obscure and often-disregarded pieces of theropod anatomy. Nevertheless, they are actually remarkably diverse. Besides the obvious differences between rudiments or near-rudiments and powerful prey-apprehension-tools, even forelimbs with similar anatomy and purpose such as those of Acrocanthosaurus and Allosaurus are still surprisingly variable. Ranges of anteroposterior movement, where available, indicated by curved arrow.

Animal Profile: (Kulindadromeus zabaikalicus: (Godefroit et al. 2014): Not only is it another feathered ornithischian, it also preserved multiple (both simple and more complex) types of filaments along with equally many different types of scales, proving once more how diverse a single archosaurNs integument can be. It is a small Jurassic neoornithischian from (and named after) the Russian Kulinda Locality. On the whole, this animal is clearly further evidence that we should stop thinking of non-avian dinosaurs as big, lizard-like beast, and instead imagine them as superficially similar to birds or even mammals.

Creature of the week: Siats meekerorum was a huge, Cenomanian neovenatorid, only rivaled by Chilantaisaurus tashikouensis in terms of size. Descibed in October 2013 (Zanno & Makovicky 2013), it is the most recent addition to the pantheon of giant theropods. Referred material consists of a partial ilium, some appendicular fragments and several vertebrae, thought to be from one of the biggest predators that ever lived in North America. The size of the ilium points out to an animal significantly larger than Aerosteon riocoloradensis, possibly close to 12m long, which makes it comparable in size to the earlier carcharodontosaurid Acrocanthosaurus atokensis. According to the describers, this specimen wasn’t even fully grown. Together with the also recently discovered tyrannosaurid Lythronax argestes, it helps constrain the time of the allosauroid-tyrannosauroid faunal turnover on the northern hemisphere to an interval of approximately 20ma. 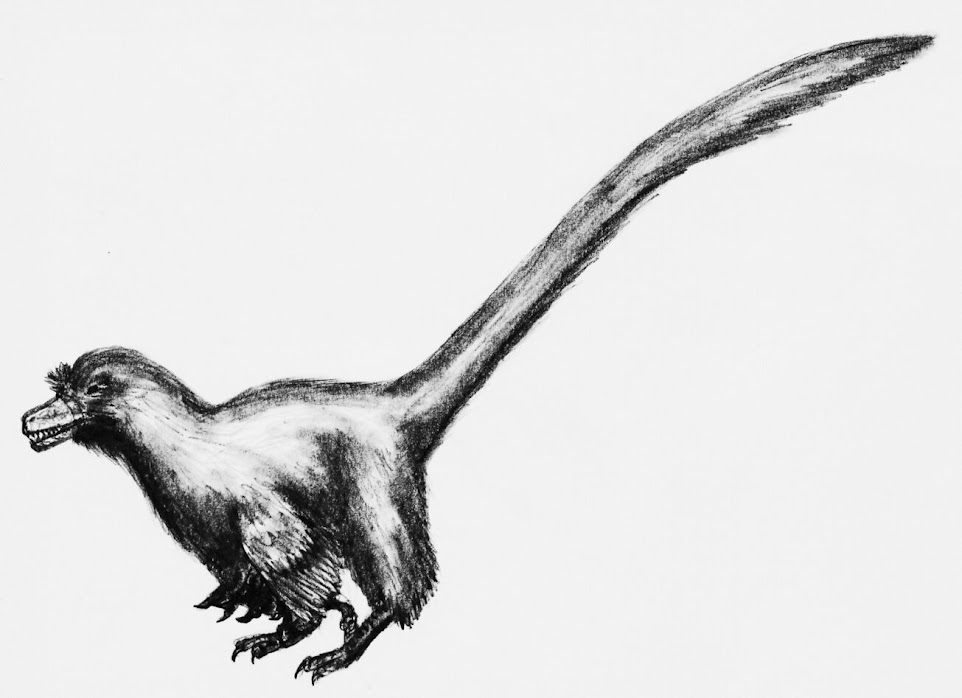 Animal Profile: Pyroraptor olympius is a small velociraptorine dromaeosaur from the Campanian-Maastrichtian boundary of France. It's one of the few well known dromaeosaurs from Europe, even tough the oldest known members of the group were found there. P. olympius shared it's habitat with another dromaeosaurid, Variraptor mechinorum. Similar in size and morphology to the more well known and marginally older Velociraptor, Pyroraptor was likely an agile predator of small and midsized animals, similar to extant accipitrids, that occasionally took larger animals, employing a set of hypertrophied claws, dexterous limbs and flesh-tearing jaws. It's inferrably large brain and the discovery of several associated Deinonychus specimens furthermore suggests it was capable of relatively advanced forms of social behaviour.

Animal Profile: Coelophysis bauri: This small (~3m and <30kg), basal theropod is in totally unspectacular in most regards, and yet it is among the most popular dinosaurs, and certainly the most well-known Triassic one. Indeed, the special thing about it is that everybody knows it. Perhaps, its because we know it was a cannibal (not that that was overly unusual among dinosaurs), and that there are so many specimens of it. 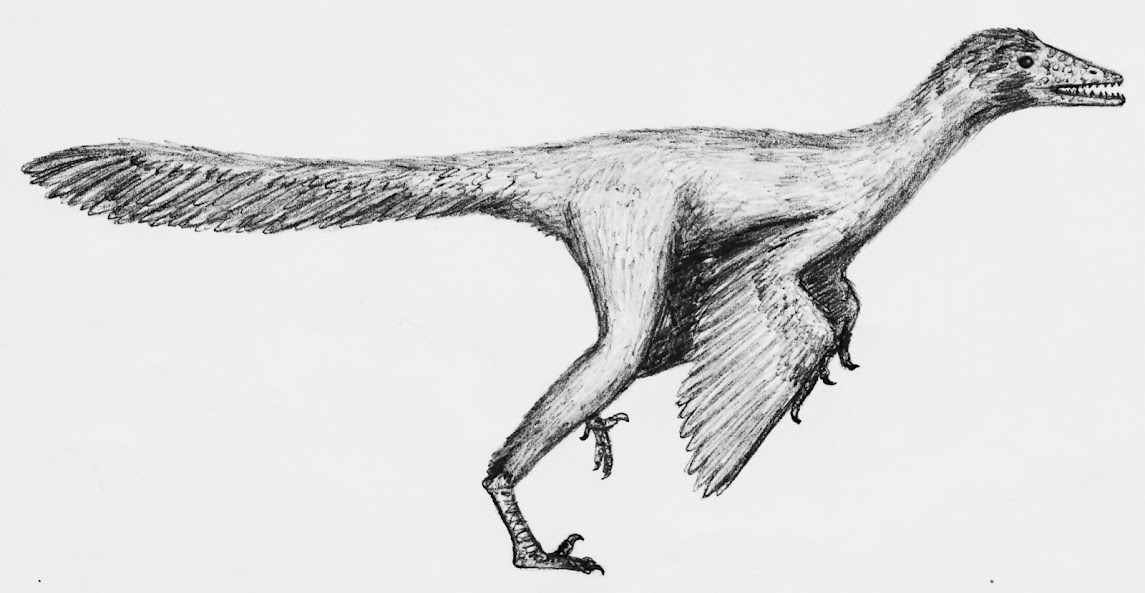 Animal Profile Aurornis xui: Archaeopteryx finally confirmed as the first bird? Possibly! Archaeopteryx dethroned? Nevertheless! A. xui from the Bathonian of China is roughly 10 million years older than the famous "first bird", and referred to a stem-based avialan clade. But the question one inevitably has to ask is; So what are birds actually? Where does a paravian start to be a bird?

Creatures of the week: Allosaurid skulls compared: Probable dimensions of Allosaurid skulls compared; a smallish A. fragilis; the famous Big Al is the lower bound, here compared to the largest A. fragilis; commonly known as Epanterias. The largest known specimens of Saurophaganax maximus, based on a huge humerus and claw, and an ichnotaxon that enourmous, 80-90cm footprints in Late Jurassic Morrocco demonstrate the potential maximum sizes reached by this taxon. These skulls, except for the small but complete Big Al, are relatively rough estimations, but they can give an idea of how large and formidable the largest allosaurs might have been, contrary to popular belief. 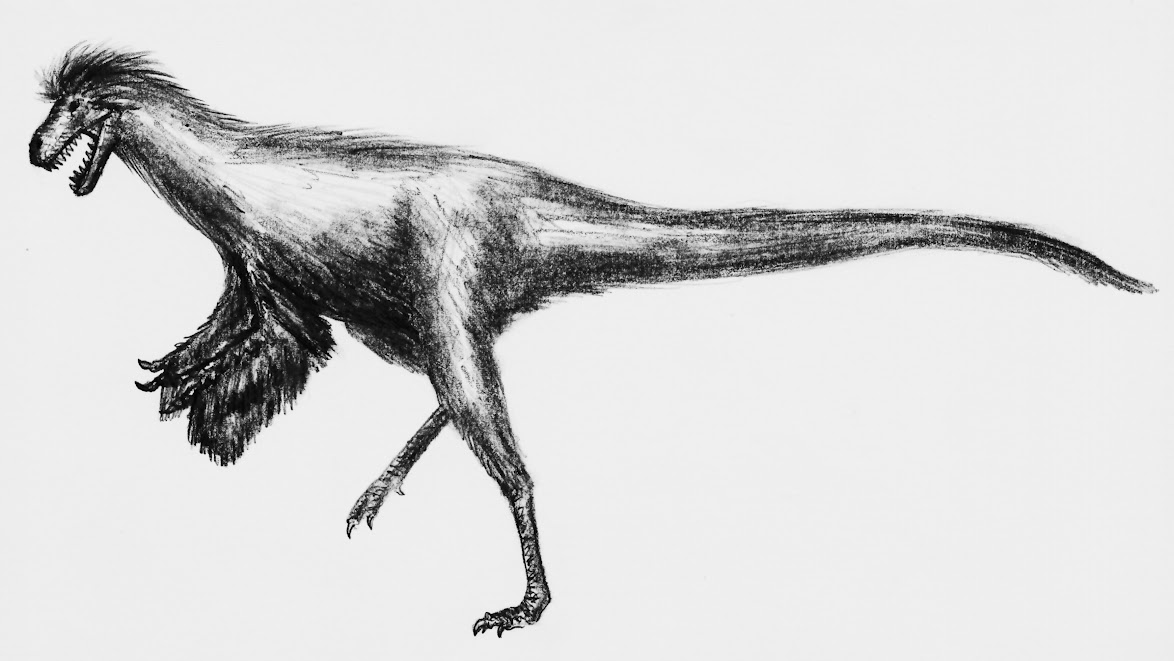 Animal Profile Eotyrannus lengi: Known only from a single incomplete, subadult skeleton from the Barremian of England, this intermediate sized coelurosaur is traditionally placed as an intermediate tyrannosauroid. According to Mortimer, if additional data are added to the analysis, it actually turns out slightly closer to birds than tyrannosaurs. The only resemblence with the later, more popular tyrannosaurines that one can see superficially is in the skull, while the rest of the animal seems that of a typical coelurosaur, with long limbs and elongate, slender built.

Animal Profile Tyrannosaurus rex skull: FMNH PR 2081, or better "Sue" is and remains one of the largest and most impressive theropods known, measuring a whole 12,3m in axial lenght and probably weighing in at 6-8t, and of those it is definitely the most complete. Despite the name, Sue's gender is totally unknown. The skull of this specimen, despite being badly crushed, is exceptionally well preserved, and very impressive--still the size figures vary quite a bit (from 1,4 to 1,53m) depending on how it is dewarped. The most complete osteology of a theropod that I'm aware of lists the dimension shown in the diagram, but they are mere approximations. It is among the widest, most voluminous tetrapod skulls known, and likely the most massive theropod cranium (by mass or volume)). On the other hand, despite T. rex reputation regarding it's huge skull and bite force, sue does not hold the records for skull depth or lenght; I have shown the major contestants among known theropod specimens in some other pictures. still, this may be the most well known specimen of any dinosaur (at least with the exception of the Berlin Archaeopteryx lithographica), and certainly among the most important ones for our understanding of giant theropods.

Animal Profile Mapusaurus roseae' and Giganotosaurus carolinii' skulls: Another comparison fo two huge theropod crania: Both are from South America, both are carcharodontosaurs, but Mapusaurus is a few million years younger. Here I've showed both of their largest reported skulls compared. While probably smaller than Giganotosaurus, it is obvious the corresponding animal was far larger than the often-miscited 10,2m. Furthermore, the largest remains attributed to the species are 103-110% those of the Giganotosaurus holotype in linear dimensions, meaning the biggest specimens might have had the longest skull of any theropod, as shown in the phantom outline.

Carcharodontosaurus saharicus' and Spinosaurus aegyptiacus' skulls: The crania of two of the largest terrestrial predators ever compared; Carcharodontosaurus saharicus was a gigantic carnosaur, likely more than 13m in lenght, Spinosaurus aegyptiacus was a megalosauroid spinosaur conservatively estimated at more than 14m. Both lived in cenomanian Africa and are known from several fragmentary collections. The displayed skulls are the reconstructed cranial remains of the each species' largest specimen, the neotype SGM-DIN 1 (Sereno et al., 1996) of C.saharicus, a nicely preserved skull missing the premaxillae, quadrates, quadratojugals and squamosals, and the specimen MSNM V4047 (Dal Sasso et al., 2005) of S. aegyptiacus, consisting of a rostrum nearly a metre in lenght. The unknown parts where restored after related animals (Acrocanthosaurus atokensis, Irritator challengeri, Suchomimus tenerensis).

Animal Profile of the week: Leedsichthys problematicus: This huge fished name is probably one of the most fitting names ever given in the history of nomenclature, because estimating it´s proportions and dimensions has proven so problematic. searching for it on the internet you can find all kinds of astronomic size figures, including 27m from BBC's Walking with sea monsters and 12-22m from wikipedia. It is commonly believed to be the largest “fish” ever, ranking even higher than the gigantic lamnid Carcharocles megalodon, but was it? New revisions like Liston & Noè(2004) of this animals size do actually show it was less than 10m long! The whole scientific community is probably still wondering how such an exageration of its size could happen. The answer is easy: The same way the 25m liopleurodon “evolved”! 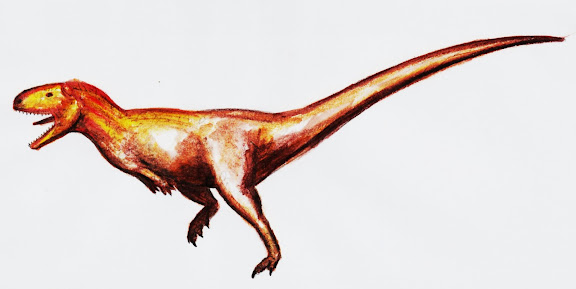 Animal Profile Abelisaurus comahuensis: An impressive abelisaur from the Campanian age of Argentina. These animals probably had some of the strongest bites of all dinosaurs, and Abelisaurus was among the largest, reaching up to 9m long. Like the tyrannosaurus found in the northern hemisphere, they had massive, bulky skulls and tiny arms. This species must have reached weights exceeding 2t. 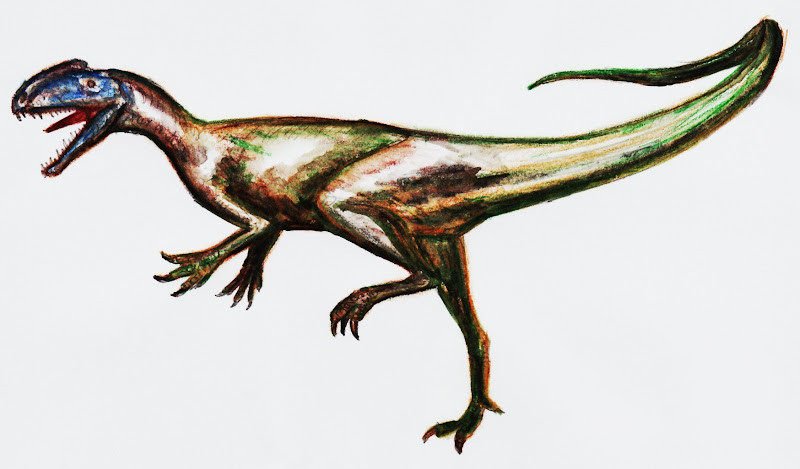 Animal Profile Zupaysaurus rougieri: Not much is known about this 4-5m long Late Triassic theropod from South America. It was probably related to Dilophosaurus, as can be seen in the gap between praemaxillary and maxilalry teeth. Most reconstructions show it with two crests on the skull, a typical feature of dilophosaurids, which was presumed to be formed by the nasal bones, and not, like in many other theropods, also by the lacimals. A recent analysis has however cast doubt on the presence of a crest, deducing that it could have been formed by lacrimals being dislocated dring fossilisation. The skull measured about 45cm in lenght, suggesting that it was among the rather large Triassic theropods, together with the european Liliensternus liliensterni.

Animal Profile Cryolophosaurus ellioti: C. ellioti is a dubious, Lower Jurassic theropod from the Antarctic. Some consider it a basal tetanuran, being among the first representatives of that lineage, maybe together with the enigmatic Saltriosaurus. Others consider it a dilophosaurian coelophysid. Probably measuring ~7m it represents one of the largest theropods of it's time period. In overall built it was probably a very slender animal, a feature that most likely made it a fast runner. This further confirms the tought of it being a dilophosaur, a group for which such a built is typical and actually found in all members.

Animal Profile Jeholornis prima: This basal avialan from the Jiufotang Formation of Early Cretaceous China is possibly the earliest and most primitive definitive bird known. It shows several primitive characteristics, such as a short, deep skull. J. prima was among the largest Mesozoic birds, reaching nearly 1m in lenght. 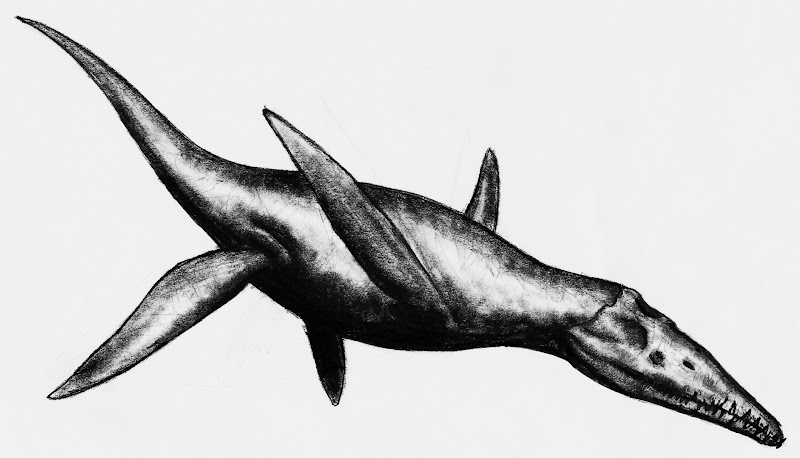 Animal Profile Pliosaurus macromerus: This huge predator is probably the largest pliosaur known to science, with an incomplete, referred mandible from the Oxford clay formation measuring almost 3m long. While estimates have varied between 13 and 18m. during its long, complicated taxonomic history it has been known under several different names, including Stretosaurus and even Liopleurodon macromerus

Animal Profile Allosaurus fragilis: It has been known for a long time, it might be one of the most well preserved theropods of all time, the most complete specimen (the sadly undescribed SMA 0005) missing only 11 small bones, and yet it remains mysterious. The holotype is undiagnostic, and no neotype has been designated so far, making the taxonomic mess of several possible species unresolvable. Some allosaurids attained impressive sizes, greatly exceeding the 11m and possibly 12m marks. A well known example of a giant A. fragilis is AMNH 5767, the holotype of "Epanterias amplexus", reaching similar lengths as the more popular T. rex. Compared to the latter its bite is a very different mechanism, the skull having been found to be tremendously strong in the dorsoventral plane, but very narrow and likely not able to produce strong bite forces. Instead, it used a powerful strike-and-slash bite, that made use of the ventroflexive neck muscles to drive its upper dentition into and through the flesh of its prey.

Animal Profile Gargoyleosaurus parkpinorum: an upper jurassic ankylosaur of about 3-4m in lenght, weighing up to 1t. G. parkpinorum is among the earliest ankylosaurs known to science. 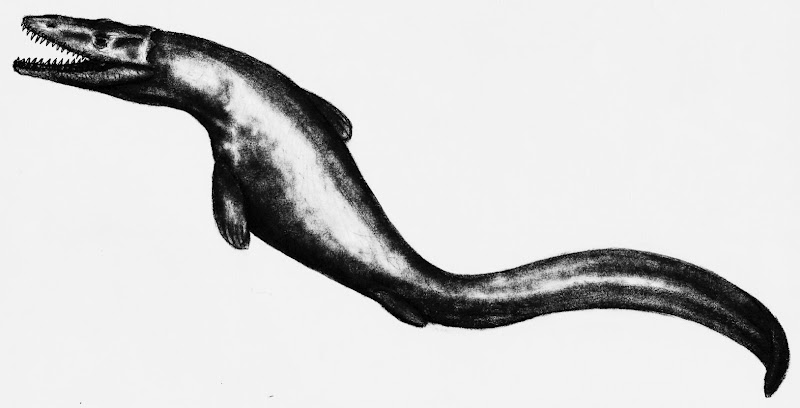 Animal Profile Mosasaurus hoffmanni: at up to 15m in length, it is the largest known mosasaur and one of the largest cretaceous predators. Essentially a huge, snakelike, marine monitor lizard, able to move fast and swallow large prey whole, this mosasaur had no equal in Upper Cretaceous waters.